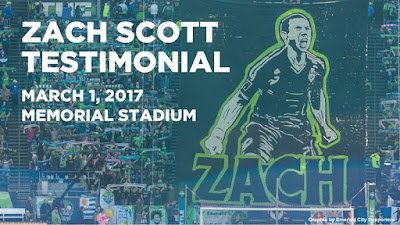 In 2016, the Seattle Sounders finally captured the long-awaited MLS Cup Championship. It was a perfect ending for the career of former Gonzaga University product Zach Scott, who spent 15 years with the club following his graduation. On March 1, he will be honored with a testimonial match put on by the Emerald City Supporters and Seattle Sounders FC that will feature many of his previous teammates, including his younger brother and fellow Zag Dan Scott, Spokane Shadow player/coach Chad Brown and former Yakima Reds players Jake Sagare and Santa Maria Rivera.

The Zach Scott Testimonial - to be played at Memorial Stadium with a 7:00 kickoff - will feature a star-studded cast of current and former Sounders from the MLS and lower division eras with Brad Evans and Ozzie Alonso serving as the coaches for the 34 players. At Zach's request, 100% of the proceeds from the match will be given to the Pediatric Brain Tumor Research Fund, the Seattle Sounders RAVE Foundation, and a college fund for his 3 children. Tickets start at $12 (incl. fee)

Coincidentally, most of the former area players ended up on the same squad for the testimonial as they were selected by Ozzie Alonso in the draft. Alonso chose Steve Zakuani - who will be the guest speaker at the Spokane Shadow banquet March 11 - with the first overall pick and Brad Evans chose brother Daniel Scott with his first pick. Alonso then chose Zach third overall and went on to also select Brown, Sagare and Rivera.

Here are some brief notes about each of the area players that will be playing in the testimonial.

A defender for the Zags, the Hawaii native scored just five goals in 48 games for the Bulldogs from 1998-01 (GU bio header below), but his senior year did feature a hat-trick against Loyola Marymount. After finishing at GU, he became a staple for the Sounders during the club's lower division era, making 154 league appearances in seven seasons while winning two regular season and two league championships as well as making headlines with upsets versus MLS competition in the US Open Cup.

When the Sounders moved to MLS in 2009, Scott made the cut as one of a handful of players that remained with the team and although he limited appearances the first two seasons, he once again became a regular contributor from 2011 onward. The team captured four US Open titles, a regular season championship and, of course, this past fall's MLS Cup championship.

The younger brother of Zach, Dan attended Gonzaga from 2003-07. Also a defender, he went on to play for the Tacoma Tide and Seattle Wolves in the USL PDL for two seasons after graduation from GU before signing professionally with the Kitsap Pumas in the same league. After a year-plus with the Pumas, he was signed by the Tampa Bay Rowdies of the then second division NASL. He later moved to the Carolina RailHawks. He continued to play in the NASL through 2015 and is now a personal fitness trainer in West Hollywood. Bragging Rights: Daniel was picked first by Brad Evans - before his brother - for the testimonial. 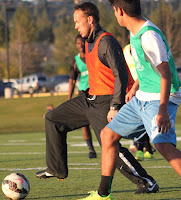 The Spokane native was a member of the Shadow since its humble beginnings as a provisional member of what is now the USL PDL in 1995, and holds the distinction of being the first player to ever score a goal in a Spokane Shadow jersey. He went on to play for the Shadow through its league runners-up finish in 1999 before moving on to the Seattle Sounders Select, a rival PDL team. Midway through the 2000 season, he was called up to the Sounders lower division side. He spent another five years with the club and Scott, winning the league championship in 2005.

Brown went on to become a coach with stints Fresno State, UNLV and West Virginia as well as Region IV ODP and Washington Crossfire. He returned home to Spokane in 2014 and was named the head coach for the Shadow First Team in it's return to competitive play after a nine-year hiatus, leading the team to titles in its first two seasons in the Evergreen Premier League.  [Photo: Chad training with Shadow First Team (INWsoccernews)] 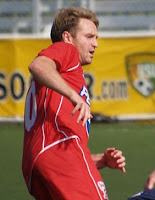 The Yakima native attended the University of Washington after graduating from West Valley HS, where he would later coach the HS Boys team briefly. During his collegiate career he experienced his first stint with the hometown Yakima Reds from 1998-00. He spent one more season in the USL PDL with Seattle Sounders Select in 2001 before landing a deal with the newly-reborn Portland Timbers lower division side. He spent three seasons with the Timbers with a brief stint with Vancouver Whitecaps before his final two years as a pro with the Sounders, where he played with Scott through 2006, capping his pro career with a regular season and league championship. He also had stints abroad with Grimsby Town and Halifax Town between USL seasons. Two years after his pro career concluded he returned to Yakima for three more seasons with the Reds from 2008-10. He has been a coach with Washington Rush since 2012. [Photo: Sagare playing for Reds (GoalWA/JenniConner)] 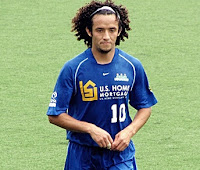 The Mexican native grew up in Yakima where he attended Eisenhower HS. Amidst trips to try and kick off a pro career in Mexico, he spent time playing for the Yakima Reds for six seasons, attending Wenatchee Valley College and Seattle University in the meantime. He helped guide Seattle U to the NCAA Division II championship in 2004 with an undefeated campaign. He would find his was to the Sounders lower division side in 2006, winning the regular season and league championship as a teammate of Scott. A few years ago, the now defunct local sports drink company Golazo featured Rivera's life story in a mini-documentary as part of their branding process.  [Photo: Rivera playing for Sounders (GoalWA)]


A Most Improbably Life video [+]

The former Sounder briefly played for the Shadow First Team on its opening weekend of play in 2014 to help bolster its roster, which was awaiting several collegiate players.

Here are the player announcement and draft stories.

Posted by Gerald Barnhart at 6:25 PM 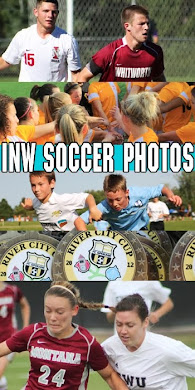